Ok, I'm one of the people who swore that she was not going to jump onto the Fitbit wagon, no matter what. It was GARMIN or BUST.

I SWORE to myself that I wouldn't be one of those step-counting obsessed folks who, if they hadn't reached their step goal before bed, would walk around the house, up and down the stairs....just to get some damned steps in.

Well, yesterday I found myself doing exactly what I said I wouldn't. I was all primed to take a nice, hot lavender-scented bath and well, I still had on the Fitbit Charge HR that my youngest brother had painstakingly saved up for to get me for Christmas.

I pressed the little button on the side, because OF COURSE I had reached 10,000 steps. I had been active all day, walking up and down hills and stairs on the very hilly campus where I work. I had even done two The Firm Express videos that morning.

I'm pretty distractible, and I knew that if I took it off before I had reached that now elusive goal, I would forget about it and not finish it. So I started doing circles around my bathroom, which is fairly small, and got a little dizzy. But I didn't care.

So there I was, pacing and naked in my bathroom trying to get my 10,000 steps in. When I realized how ridiculous that was, I stopped and looked at myself in the mirror. What was I doing? What had I become? Some numbers obsessed person, who normally did way more than 10,000 steps per day anyway with all of the running training I had been doing, but who was suddenly attached to this vinyl-rubber coated device that tracked my heart-rate, steps, flights-of-stairs completed, calorie-burn, and daily mileage?

Yep. That was who I was in that very moment and to be honest, I was enjoying every minute of it. But I needed to take that bath because the heat in my house was dissipating all too quickly.

I took the Fitbit off ever so gingerly and placed it on the counter, letting the idea of finishing my 10K go. I reasoned with myself: Actually, I didn't put the Fitbit on until midway through the first video this morning, so I'm good. I know I did way more than 10,000 steps anyway.  I'm pretty active. I mean, I'm really active. So that number isn't going to determine whether or not I have a good, restorative bath...

I took my bath with eyes closed, luxuriating in the soothing scent of lavender.  Ah! What a long day it had been. Nice to be able to relax after a long day and listen to some Bonobo.

And then I opened my eyes, the green light from the underbelly of the Fitbit taunting me.  You haven't finished yet.

I tried my best to ignore it but I couldn't. It would bother me all night if I didn't finish.

I got out of the tub (the water was cold and the notion of bath-time was old by now anyway), dried off, lotioned up and put on my Christmas jammies, sweats, and thick hiking socks (did I say my house was cold yet? Cuz it's BRICK) and promptly put the Fitbit back on my wrist. I was going to kill these steps.

I collected clothes around the house and put them in the washing machine. I ascended the stairs to my son's room to tuck him in just one more time. I swept the rug--(because it would require too much adulting to actually get and keep a vacuum.) I loaded the dishwasher. I checked on my son again to his chagrin. I straightened out my growing collection of trail shoes in the mud-room. As I was walking across the living room to start folding clothes, it buzzed.

Now I could go to sleep.

Over the past couple of months I've had the opportunity to test A LOT of gear. So this year, a couple of posts till be dedicated to reviewing the cool gear that I get to wear in my training and racing.

Here is a cool headlamp that may have you wanting to get up at 4AM and head out the door just so you can use it:

SCANGRIP I-View Headlamp with Sensor Motion ON and OFF Function

Right before I set out for my epic journey on the Javelina Hundred 100K course in Fountain Hills, Arizona, some lovely folks sent a high-tech lamp for met to use during my early morning and night runs. I decided to use it for the third and darkest 15.5 mile loop of my 100k. This is a a lamp that is very different from traditional headlamps designed for the trail. It was actually first designed as a work lamp for professionals who need the entirety of their workspaces lit.

On the trail, the lamp illuminated a generous and wide swath of space in front of me. It was a very bright light, that I imagine working even better in the light absorbing, dense forests of the Southern Appalachians. The lamp was GREAT, for about three hours and then the battery died. It was my fault completely. I hadn't read the directions and had apparently left the lamp on in my bag at the trailhead.  Lesson learned. Read the directions and the rechargeable battery lasts for up to six hours a charge.

This lamp is a great piece of equipment to have, especially if you do a lot of night running for which you need adequate lighting say, on a very technical trail. The elastic band is fairly comfortable. Even the lamp part is big, it doesn't feel any heavier than say a comparable Black Diamond or Petzl headlamp. However, I think it could benefit from an extra adjustable perpendicular strap to further stabilize the lamp on the forehead, as runners do bounce around quite a bit. Even then, it was comfortable and not noticeable after a few minutes of running.

The coolest thing about the headlamp is that after pressing the one button to turn it on, you don't need to press anymore buttons during the entirety of your run. You can simply wave your hand in front to turn it on and off.  You do have to press the button again to adjust the brightness, but that's not even an inconvenience.

I highly recommend this lamp. Make sure you 1. have it fully charged and not sitting inside your drop bag illuminating its contents and 2. always carry an spare headlamp or small flashlight on your person.

This bad boy will run you about $75 and is well worth the investment. You won't be disappointed.

It's a Happy New Year!

It's been a few weeks since I posted in my blog..I know, I know!

But I have been super busy, what with having a million Christmas concerts at school, trying not to be a mean mommy, nursing an injury (I'm alright now!) visiting family back home in NYC, hanging out with friends, and working on some writing projects, oh and doing school work. (If you thought that teachers have it scot-free during vacations, you're WRONG.)

I visited with my old running club in New Jersey, the Chester Runners and we ran on the Columbia Trail in High Bridge. This trail is the site of my very first long runs of 15-20 miles while I was training for my first marathon, the 2011 Marine Corps Marathon. The trail follows the beautiful South Branch Raritan River, of which parts are stunning.

I also worked out at the Planet Fitness in my family's neighborhood. For ten bucks a month, you can't beat it. Even though I only work out there when I'm home during vacation, it is totally worth it to have a place to go when I'm away from home. I love treadmills, I love ellipticals, and I love using equipment that I don't necessarily have at home to change up my routine. As much as I like to be outside, I also love working out at the gym. There aren't any pools, saunas, or towels, but there are Tootsie Rolls at the front desk. I'll take it.

Lots of cool things have also been in the works. You may have noticed that I have another blogging platform on the Women's Running Magazine website, along with several other really awesome women bloggers who run and are mothers, are wifeys, are single, are struggling with various things, are elite, are not, are each AMAZING in their own right! I'm so stoked to be connected with such a great and ground-breaking magazine for women.


Also, I am happy to announce that I am now a Skirt Sports Ambassador Captain! 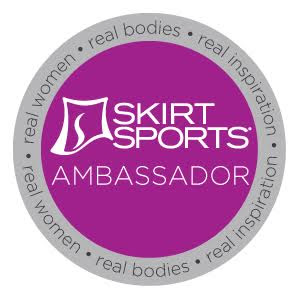 I have fallen in love with this brand. Skirt Sports is company founded by Nicole DeBoom, a professional triathlete based in Boulder, CO (where maybe I'd like to live one day...) who was not happy with the limited apparel available for serious athletes (from professional to amateur to people like me who take running very seriously) who wanted to look and feel good in high-performance and stylish wear. The company is committed to being "a community of women who support and inspire each other in our pursuit of happiness through the transformative power of running and fitness." What more could I ask? This is right up my alley and I'm happy to be a part of this movement by and for active women!

The second piece of good news is the I just became a Swiftwick athlete. I'm so excited! I absolutely love Swiftwick socks. If you look at any of my pics on Instagram, FB, and whatever other media I happen to be in, I'm wearing Swiftwick socks--the long ones, the short ones, the medium length ones, the mid calf ones...you name it, I'm wearing them. Never had a blister, even when running for 12 plus hours in the rain and crossing 3 streams. Nope. No hotspots, no nothing. Also, I don't think I can go back to wearing non-wool socks, unless they're Swiftwick, of course.

Stay tuned cuz I've got some other cool things in the works.....