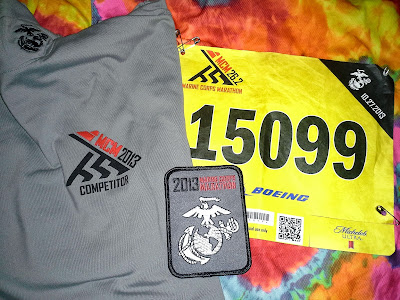 This name was given to me by a student who thought it was appropriate since I am now the proud owner of 5 marathon medals.

So on Tuesday October 29, when I waltzed (I mean, shuffled-grimacing every step) into class wearing my newest bling, some of my students still hadn't grasped the notion of running a marathon. "Wait, so you ran how many miles?" Or, "Why would anyone run that much?" "How long did THAT take?" When I said 6 hours and 24 minutes, the response was "WOW! What was the winner's time?" When I told them that the winner ran the race in two hours and 21 minutes some gasped and asked "Is that even possible?" We then got into a discussion about how one trains for a marathon, why (again) anyone would want to run so much, why would I drive 9 hours to (again) run so much, and well, did you take pictures of any hot marines?

Training
How did I train for MCM 2013? I ran a bunch but I didn't get in as many 16 mile+ runs as I had wanted during the 7 or so weeks preceding the marathon. I moved to Northern Georgia from New Jersey at the end of the summer, and although it was the move I was meant to make, changing venues came with its own set of challenges, like mountains and really serious hills (oh, and adjusting to a completely different lifestyle and schedule.)

Fortunately, I got in a lot of my weekday runs with the cross country team that I assistant-coach. Many times I did two-a-days, running 2-4 miles in the mornings, and 2-3 miles in the hot Georgia afternoons. I cross-trained a lot, swimming twice a week for 30 minutes, spinning, and doing lots of boot-camp type plyometric workouts.

I did some serious carb-loading the week before. Because, you just have to. And it tastes good. My awesome cousin who I stayed with helped me on that front, spoiling me with pasta, garlic bread, French toast....and numerous other goodies on Friday and Saturday.

Marathon Day!
The morning of the marathon was crisp, though not cold. And thankfully, there was no impending hurricane to worry about. The sky was a perfect array of muted dawn colors. This was the perfect backdrop for the American flag-waving parachute jumpers. How cool. How friggin' cool.

I learned from last year that I needed to move over to the left side of 110 so that I could get to the start line quickly without tripping over people. Beating the Bridge is a SERIOUS AFFAIR and is not to be taken lightly. I started out doing about an 11 minute pace, which for a marathon is still too fast for me. I felt it in my lungs and in my legs that had not quite recovered from the weird flu-like virus I had suffered from 3 weeks prior to event. At the 5K point, I seriously doubted that I had it in me to finish the marathon. First inkling of tears. I didn't feel up to the task, but I had been talking about it for months to everyone who would listen so I would have to finish regardless or I would look like a fool. More tears.

Miles 4-9 (Ok, this is totally normal)
These miles are usually my sweet spot in long runs, and were my sweet spot during MCM. I usually am warmed up by this point and the running feels easy almost. I even got to see my super-motivational and awesome friends as they were running in the other direction on Rock Creek Parkway. I WOOT-WOOTED them, and continued on quite happily even though that part of the course lasted for years.

Miles 9-13 (Ok, I can get through this, maybe...)
I was still running at an okay pace, not great, but not terrible either. My legs and feet started hurting at this point. For me, it is unusual for the appendages to be in pain so early on, but again I attribute this to flu-like virus/infection that attacked my ankles, knees, neck, feet and hands with arthritis like stiffness and pain. Maybe it was in the stars, or maybe it was Providence but as soon as the pain started to really bother me I spotted someone holding a sign that said "RUN WITH GRATITUDE". I will, I mouthed to myself.

This is when the second bout of tears came on suddenly. I was in a lot of pain, but I was still able to move my body. I had no business doubting my ability to finish this physical and mental (and emotional) endeavor. No business. The tears were from a combination of pain, a deep feeling of gratitude, and the realization that I had 13.1 more miles to go. It was never going to end.

Miles 13-15 (Oooh, another sweet spot!)
Somehow I regained energy after a yummy (relatively speaking) Mint Chocolate GU, some water and the first quarters of oranges. Thank you Marines and volunteers. I really needed that nutrition. I was able to run these two miles fairly "easily." Everything is relative.

Miles 15-17.5 (Why am I doing this again?)
Miles 15-17.5 take you by the various Smithsonians and the Gauntlet, apparently. I still don't know what or where the Gauntlet is...but there are excellent vantage spots for very expensive photos here.

Marathoners have to reach this point by 12:30. I was able to do this with time to spare-but I still wasn't playing with the possibility of not reaching the bridge by 1:05. I ran-walked, alternating light posts. Run three, walk one. Run one, walk three. Whatever the legs and feet thought was appropriate, I did. At this point, I had to shut the mind off.

Miles 18-20 (BEAT THE BRIDGE, DAMMIT)
There's a point in which you know that you'll reach the bridge but you cannot relax until you actually see the drumming ladies JAMMING it up. They looked and sounded awesome. As soon as the slight incline of the bridge came into view, I exhaled like Whitney Houston in Waiting to Exhale. I also looked desperately for members of the Red Felt Running Club at the foot of the bridge. True to their crazy and awesome nature, they were there cheering everyone on and handing out treats that weren't gels. THANK GOD! I scored a Twizzler and a bag of Cheezits (so much for 10 months of GF eating--I didn't care, I couldn't fathom any more overly sweet gels) and continued on my way.

Mile 20-21 (I HATE THE BRIDGE)
This part of the course really is a death march. This may actually be the longest mile ever. No, really.

Many people are stooped over, some are walking in a daze.
Others are stretching. Some are just sitting, barely moving, on the pavement. The bridge lasts forEVER. And it is hard on your feet. And it is boring. And you have nothing left to think of, because you've thought of everything already, you know, in the last 20 miles. Also, you are just numb.

Fortunately, I had already reached the dreaded wall during mile 3 so I knew I was golden (even though there was still 10K left). Some may ask, what's 10K after you've done 20. Everything. It is everything and it takes everything to continue. Anyway, there was no turning back. I soldiered on (pun intended), speed walking just so that it could be over.

Miles 22-24 (THESE FLAGS ARE TOO BRIGHT AND CHEERY AND I'M NOT FEELING CHEERY)
The flags of Crystal City, the donuts. That's all I remember. Green to green flag. Walk to yellow. Red to Red flag. Walk to purple. Blue to blue flag. During these miles, I discovered some energy reserves. Where they were at mile 3, I don't know. But here they were offering themselves to me. Okay. Let's do this. And thanks for the Sports Beans that I'll stuff in my bra for now since nothing else with sugar will be going in my mouth.

Mile 24-25 (REALLY?)
This may be the second longest mile ever. I think they intentionally made it longer just to make me mad.

Mile 25-26 (Almost there!)
I started running again. Some other reserve perhaps? I need to get this done. REEL THOSE SUCKAS IN, I thought.

When I could see the 26 mile time, there were MORE tears. I am generally not a crier. But these tears were free flowing.


Last .2
I made the left turn onto that hill. A marine yelled DIG DEEP. YOU GOT THIS. YOU. GOT. THIS. And I did. I hi-fived all the beautiful, wonderful, and brave marines right before I was knighted ceremoniously with my third MCM medal. 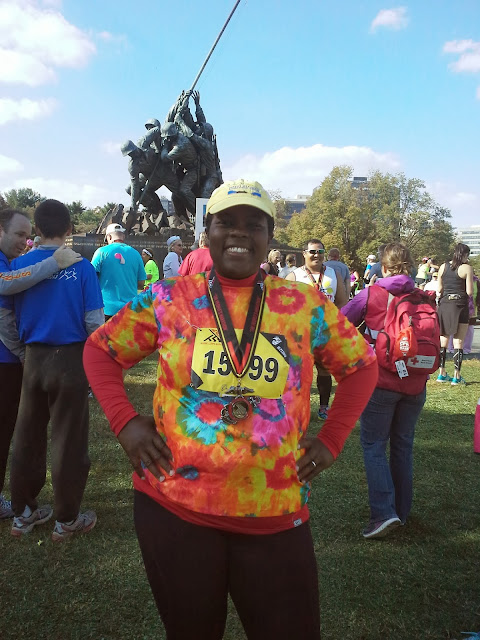