An African, 20 Bucks and Snow. Lots of Snow.


While Newark, New Jersey is not on my bucket list of the most beautiful places to live in, it holds a special place in my heart. It was where almost 17 years ago I would work for a big corporate consulting firm among MBAs and business types feeling very self-important in my early 20s, and where I would eventually meet my husband at the Penn Station after a freak January-rain storm had kept me hostage in the office for 5 hours after work had ended. I left the following October and married my beautiful West-African husband a few months later. My return to Newark for the Lenape Trail 34 Mile Run, a fatass event  sponsored by the New Jersey Trail and Ultra Runners, was equally auspicious, and also included an African.

After waking up at 3:30am (if you are a runner who does weekly long runs, this is completely normal, especially on a Saturday or Sunday) and driving to a town a few miles west of Newark that would be the finish of the 34 mile run, I arrived at the Millburn NJ Transit station, which was an ice-skating/ice-driving rink. It also was 6 degrees out and my fingers had basically frozen solid after walking across the parking lot.
Fast forward to the start of the run: I had arrived an hour earlier so that if by chance I was planning on actually finishing the run, I would have a good opportunity to do so in daylight. Arriving earlier meant that I would have to find the start on my own; as I left the Broad Street station, I started walking in the wrong direction, WITH my navigation engaged on the cell phone. After watching my ETA climb up to 45 minutes, I decided to hail a cab. A NYC taxi turned the corner just as I had the thought. He pulled over and asked where I was going. Riverfront Park? Do you know where that is? NO, but I can try. I didn't even care how much it would cost, it was so cold.

As we searched for the start, we started talking. Oh, you're a teacher. That's nice. What? You're here to run? HOW much? Wait, WHY? You couldn't get me to run…Do you have kids? An 11 year old, he must be big. Oh, your husband is African? I AM TOO! From Senegal. OUI. You speak French? WOW. I am so impressed.

We arrived at what I assumed was the start, Are you sure this is it? It looks kinda remote and maybe not safe. I mean, I live in Newark and I don't know what this is…we exchanged info--my blog name, and he his writer-sister's name and email, and then I asked Cest combien? C'est un plaisir. If I had wanted to charge you I would have turned on the meter. Bonne chance, ma soeur!

After many wrong turns and stops to read my map, stop for a croissant at a gas station (I know, GROSS--but I had forgotten to eat breakfast), and talk to a random older guy on a corner who wished me well even though he had just been released from the hospital across the street with stitches and other things and was clearly in pain, I finally got on course. Locating the actual yellow blazes for the Lenape Trail was an adventure in itself, and I'm sure I looked like a crazy runner bag-lady with a croissant hanging from my mouth, a hydration pack whose hose had already frozen after only 2.5 miles, various items (ski socks, a thick striped woolen scarf, Yaktrax) bungeed to it, and a Trail and Ultrarunning buff under my Trail and Ultrarunning cap looking a little runnah-gangstah…

Running on the Lenape Trail is an adventure. The terminus of the trail is on the west bank of the Passaic River, which tries valiantly to NOT be a cesspool of petroleum additives and other poisonous nastiness. The designer of the trail wished to create a way in which to traverse Essex county in Central NJ via its parks, monuments, and tourist attractions. It is a mixed trail combining road/sidewalk running in its more urban reaches, park paths, and single track in its westernmost sections.

After finally finding my way to Branch Brook Park, where the blazes were actually visible and NOT located on the bottom of snowdrift covered streetlamp posts, I headed north into the park. A quarter of a mile in, I spotted a folded up twenty dollar bill on the ground, all lonely and forlorn-looking. Without breaking my stride, I picked it up and said thanks to the universe for paying for my tolls and croissant.

The running was easy on the street, but hellishly difficult (which required slow, slogging steps) in the knee-deep snow as the trail continued north into Belleville. Imagine a stair-climber, elliptical, Cybex Arc Trainer workout all in one with cold, wet feet just getting accustomed to wearing metal spikes on their bottoms. This was when I started to imagine I was on the South Col of Everest, pretending I was a black sherpa--in New Jersey.

After leaving Branch Brook Park, the trail crosses over Second River into Belleville Park, an ex-urban oasis that reminded me of more remote untouched trails further north.  After losing the blazes a few more times, I left the park and crossed Belleville Avenue, heading northwest. At this point I was a little less than 10 miles into my run and I was finally hungry and thirsty. I spotted Rosebuds Luncheonette on a corner where the trail would head due north again and ordered a my classic NY-NJ breakfast, a butter(ed) roll and cawfee black.

Sitting at the counter reconfiguring and defrosting my thoughts, I decided that at the very least I would run a marathon. That would be fair, I thought- 13.1 out and 13.1 back.  I felt great after leaving the restaurant and made my way up a residential street lined with neat one-family houses, some hidden by huge snowbanks. Then things began to change. As the trail begins to follow aqueducts, the traversing becomes very difficult and time-consuming. The snow on mostly unused trail, was very deep, and this required so much leg lifting, stopping, resting, balancing, etc. that I eventually had a conversation with myself and agreed that I would go no further, unless I wanted to risk being stuck in the dark, freezing woods somewhere in central Jersey/Everest. 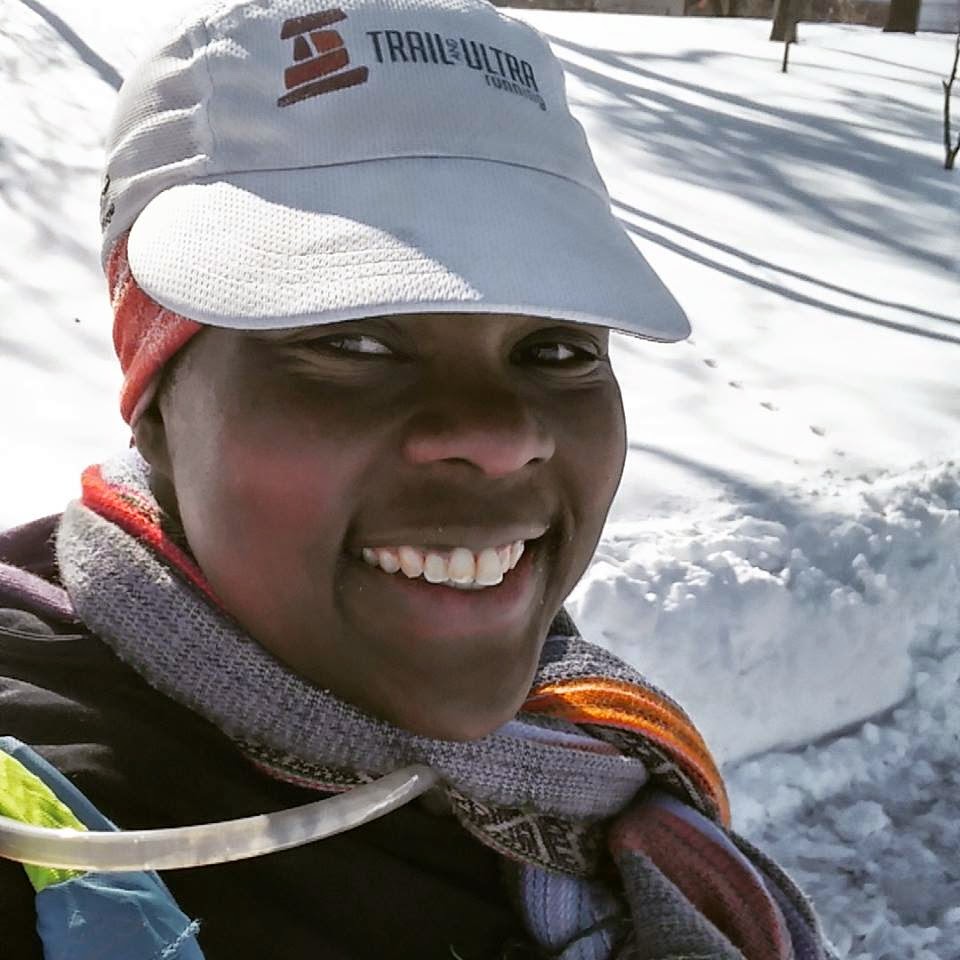 I turned back, saluted the rest of the trail and any participant who would finish that day (12 did). I hiked back out of snow-hell, and returned the way I came, this time following the trail, blazes and all back into Newark, ending my run at 19.4 miles. A bitterly cold wind welcomed me back into the city. I hopped on the train back to Milburn at Penn Station, found my car, inhaled the granola bar that I had left in it and drove back to Brooklyn.

What a day! To appreciate the Lenape Trail is to believe you are on some urban adventure, looking for clues as to where to head for the next snowy surprise. Here's hoping that next year there aren't too many polar vortices and freak snow storms on the Belleville Col and many more people will start and eventually finish this great event. Happy Trails!

A few friends and I are planning a fairly epic adventure in a couple of years. In fact, it's so epic that we have to save and raise tons of money, acquire gear and necessities (which are not cheap), and perform a huge amount of research before we even think about purchasing plane tickets. Luckily, we are all marathoners and ultramarathoners so even though the physical challenge of this journey doesn't seem too overwhelming, it IS overwhelming. We are so excited!

This started me thinking about all of the physically challenging things I'd like to do before I am unable to, whether it is death (which is certain) or some other unfortunate circumstance that prevents me.

What's on your FITNESS BUCKET LIST? Here's what's on mine (I've posted the links to these fabulous events so you can check them out and maybe do some of them yourself):
This is just the beginning.