ALL FEET ON DECK

Running on cold and metal-grey , briny sea spray mist in your face, the early morning sun appearing slowly through wispy cirrus clouds, blasts of cold wind pushing against you at every turn...

No, I'm not the Black Jesus of the North Pole gliding on water in old, bright green Mizunos (Wave Inspire) and Under Armour Cold Gear. I'm FATGIRLRUNNING on the Promenade Deck of a fancy cruise ship, complete with ELEVATORS! (Think OPRAH VOICE).

This past summer I had the opportunity to participate in the Great Alaskan Marathon Cruise hosted by John "The Penguin" Bingham and Coach Jenny Hadfield on the Holland America line. A trip like this is the only way to cruise, I am convinced. How could you do it any other way? You get MAD exercise in with friendly, well-known people in the running world,  ALL the food you could ever eat, and a chance to run in great cities and towns in the the Last Frontier. Way cool, I say.

Allow me to digress for a minute to ponder the following: WHY IS THERE SO MUCH FOOD ON CRUISES? I enjoy eating. In fact, it's no secret that I will go to great lengths to partake in the consumption of haute-cuisine. But even I was baffled at the sheer amount of comestibles available pretty much all day for the duration of the voyage. Fortunately for me, the whole time I was on the cruise I battled some sort of stomach bug that wasn't norovirus, but some other nasty stomach flu thing that was like an annoying friend that you think is gone, but at the most inopportune moment decides to knock on your door, with a big toothy smile. So, I literally could not eat all day.  In retrospect, I'm glad I didn't. 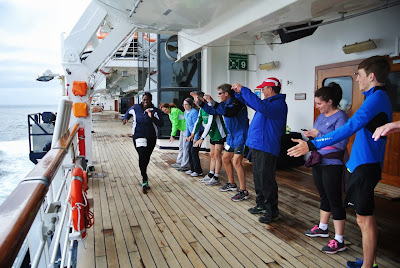 Back to this trip, which was pretty amazeballs:

What a crew! (Pun intended.) If there are two better people to lead running excursions in Alaska, I don't know who they could be but John and Jenny. With a winning combination of wit, generosity, sagesse, availability, and good old-fashion coaching and advice, it was the best of many worlds-a luxurious cruise experience with some of the most fun and challenging runs many in the group had ever done (and did I say we got to hang out with John Bingham and Jenny Hadfield for 7 days?)

The Great Alaskan Marathon Cruise is a staged race in which several runs over a few days in different ports add up to 26.2 miles. Now, for some of you die-hard-core runners, maybe you won't call this a marathon. But a marathon it was-just a different type. Cut us some slack! The race consisted of four runs: a deck run, a trail race in Juneau, an "amazing race" in Sitka, and a final trail race in Ketchikan.

The first day at sea, on our way to Juneau, I woke up at five in the morning to check out the first stage of the "course" which was a 3.6 mile deck run--that is, 11 loops around the beautifully paneled teak-wood deck, damp not from sea spray, but from a recent cleaning. (Really, it would have been much more literary had it actually been sea-spray.)  The winner of the deck run would be the person that correctly guessed their race time. My plan was to run it so that I could get a better idea of my time. Is that cheating? NOPE, since after a couple of loops I lost track of time anyway.  Instead I decided to take in the different views and enjoy the cold air against my face: From AFT, the starboard side, FORWARD, and port side. (I am now vaguely familiar with nautical terms. However, I still don't know what the heck a knot is or why nautical miles even exist.)

The ship moved along, in harmony and against the small swells of the ocean.  Sometimes it felt as though the floor had disappeared for a second and I was floating. Other times the floor pushed me up, causing my legs to tense up-- a weird but not unwelcome sensation. I dodged/jumped over water hoses, deck scrubbers, squeegees, crew members and the occasional other guest stumbling upon the deck.

The actual timed deck-run was a blast. The 35 of us ran in two waves, so that our partners could time us and so our group wouldn't create too many traffic jams amongst the other guests who were out getting their early morning walks and runs in. Every loop was a party. Each time ANY of us passed our loud and rambunctious marathon group there would give loud cheer. We even cheered for those folks not in our group. (Some of them came to expect cheers from us, so we spread our joy to them, too.)


Jenny had us doing waves as each person passed. John cracked jokes. We took pictures, high-fived our new friends from all over the US and Switzerland, ran our own races and simply enjoyed the experience of running on deck, AT SEA. So cool.