Making Friends With The Trail
Sometimes you have to go out on a limb, both literally and figuratively, way out of your comfort zone and intentionally make friends with a trail. 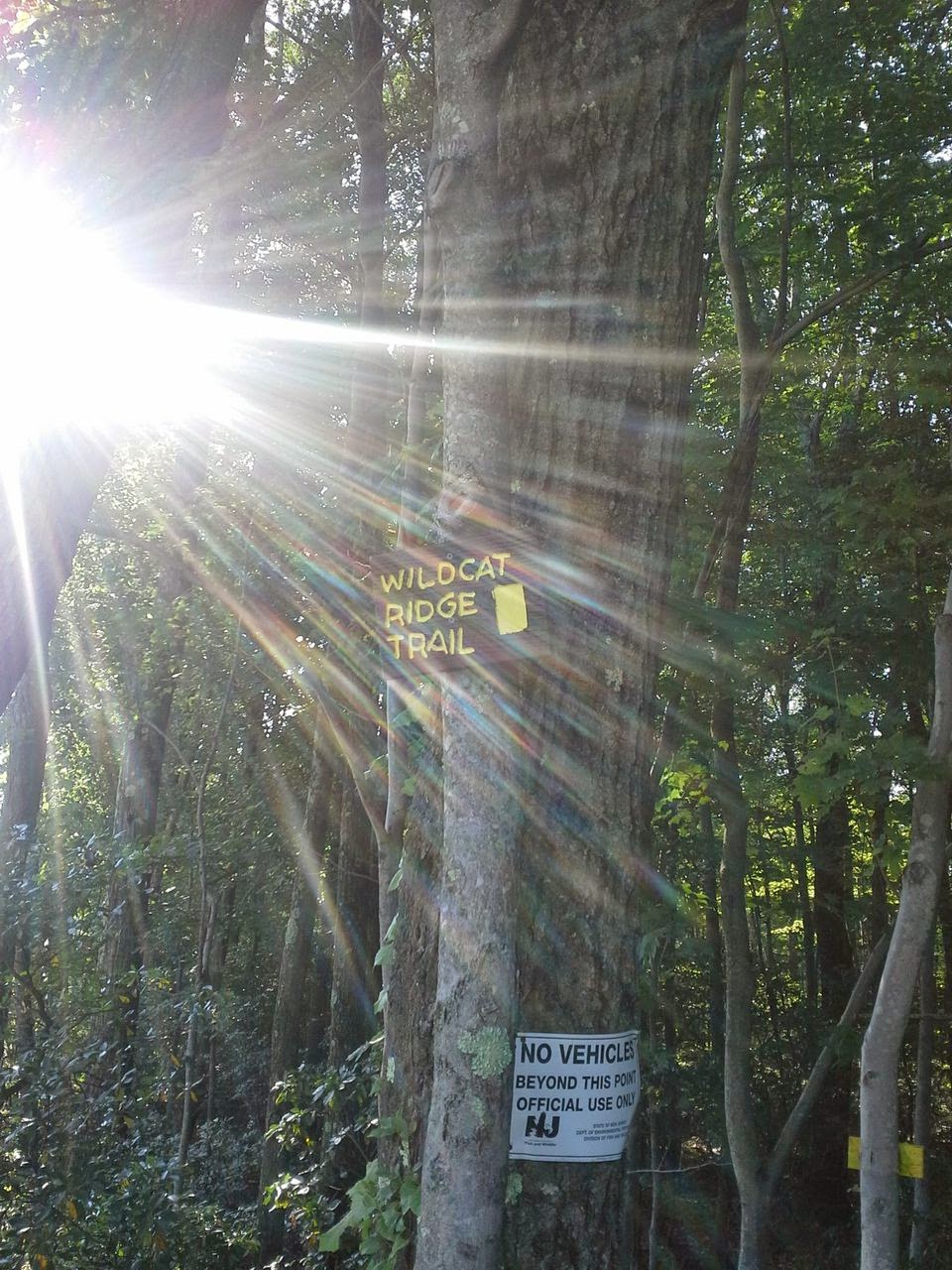 The first time I participated in the Wildcat Ridge Romp, (a consortium of doable to devilish lengths of races from 10 miles to 100K put on by my sadomasochist friends Rick and Jennifer McNulty who own the wildly successful  NJ Trail Series), I vowed to never to do it again. Each of the three times that I've done the course, I've spooked myself into believing that I was hearing imaginary black bears growling and snakes hissing at me during the first mile. (Each time, it was only the sound of large rocks rolling downhill that had been loosened by my heavy and clumsy plodding uphill.)
At the outset, the course (comprised of fire roads, old horse-carriage trails, ATV trails and  apparently dirt-bike trails, too) brings you rather quickly into a dark and cool but ugly, garbage strewn section of the Wildcat Ridge WMA. You descend into what I recently discovered used to be an actual village. In fact, if you look closely, there are ruins of a few structure that had been built with cement blocks. Although this WMA had once been the location of a string of the iron mines collectively known as the Hibernia Mine, the debris tells a different, more recent story--perhaps of transients living in anarchy...
I wondered what had possessed people to dump trash in the midst of what should be pristine forest. There are tires, cars with mangled parts, empty faded plastic pails, dried-up water-logged paper, broken glass, rusted steel barrels, decaying clothes, and other remnants of a marginal human existence. This offended my aesthetic sensibilities and my expectation to be perpetually wowed by nature and humans' supposed desire to keep the forest as it should be.  I hated the course immediately. At this point you still have about 9 miles to complete the 10 mile-loop. What would the rest of the course look like? It could only improve, right?  It did, for a while. There were also impeccable sections like this--
Luther Vandross and the shade of Cimmeria
The course winds along through a combination of densely carpeted forest floor, full of ferns, thick grasses and vines, the sometimes unmarked trails widening into rocky, chingoncito filled paths. And then there's this--

Two sections of dark and spooky hollows, one just a few shades lighter than the other. The first is an area so heavily jam-packed with 7-8 foot tall flora whose overhanging branches and leaves succeed in snagging and holding on to your running cap, multiple times.  And then the course takes you through the McNultian idea of a cruel trail joke (because there is certainly another trail we could be running on, right?) You continue on, or in my case run-creeping along, hoping that the worst is over when a dark, tunnel-like entry into what seems to be a parallel underworld comes into view. There is no way out, no escaping. (Insert Halloween-themed scream here.) No choice but to move forward, singing Luther Vandross songs at the top of my lungs. Did I care about other folks hearing the obvious fear in my loud rendition of Dance with my Father? It was singing Luther Vandross, or dying of fear. I chose Luther.
As you enter this verdantly green hell, you see a cleared out space under the huge low-hanging tree/bush complete with low benches arranged in a semi-circle. Obviously there are people who use this space for what? Meetings of the nefarious kind? Hope not. Again the trees play jokes on you, swiping your running cap again and laughing quietly. I stopped, faced the Cimmerian shade and spoke aloud,  "My hat, please. Thank you." Fortunately the tree did not speak back, and I felt comforted in having had the cojones to stop and face the darkness. If you are running more than one loop, you have to do it all over again, and it is no less harrowing.

The course then becomes a bit more traditional, with occasional technical bits and some pretty awesome single-track. And then there is a clearing out of the brush and a vista from atop a rock outcropping with a stunningly clear view of the New Jersey Skylands and in the distance, a faint stenciling of the the New York City skyline. I stood and looked out over Northern New Jersey, a little wistful and nostalgic (I moved to Appalachia exactly a year ago, the day after my second Wildcat Ridge Romp) and then tackled the next section of the course, a mostly down-hill gravel road. 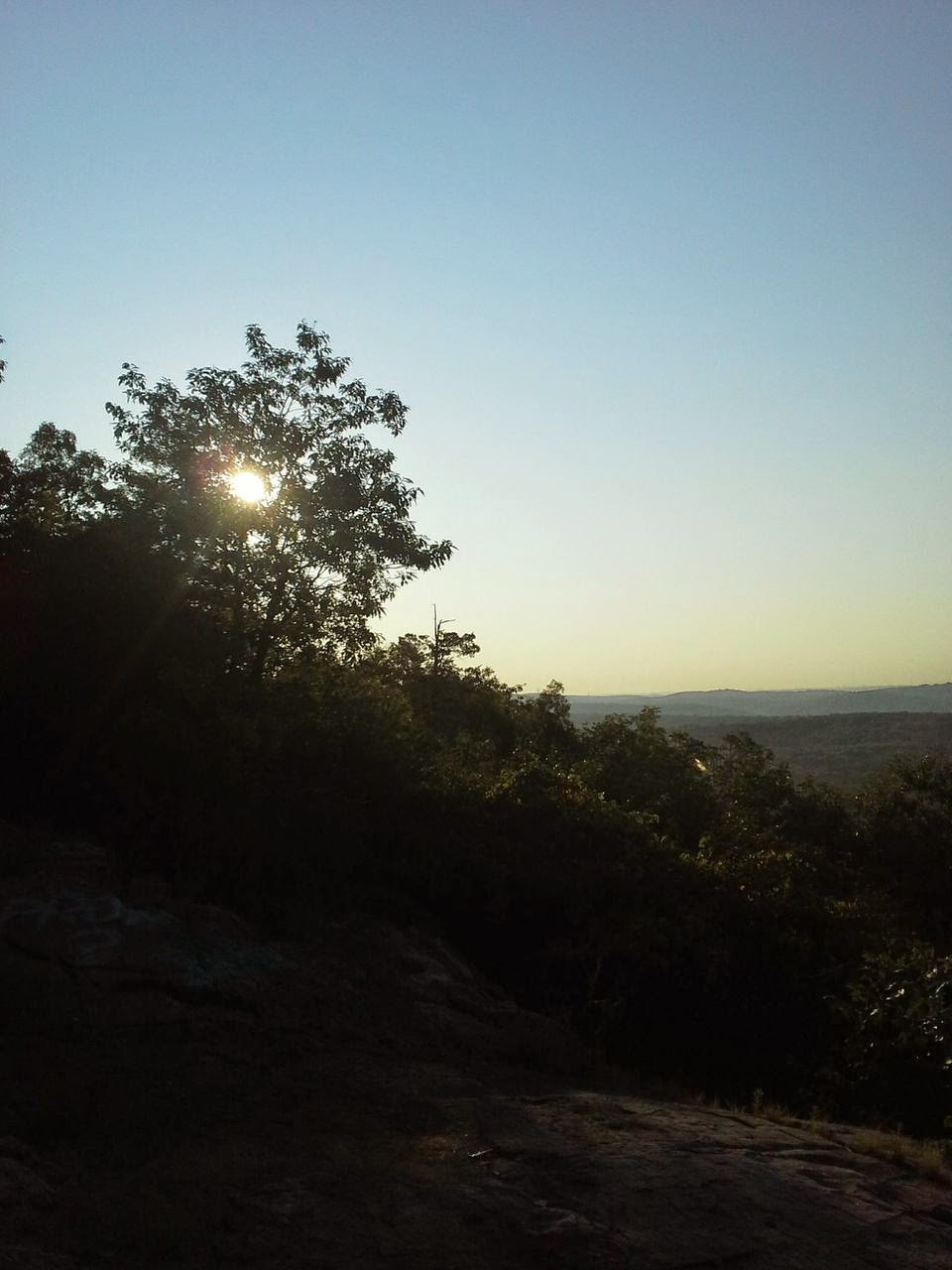 Every trail has to have a body of water that sort of creeps you out.  After the aid station, you pass by Beaver Pond, which I have sometimes referred to as Creepy Pond. There is an abundance of bull-frogs, small beaver dams, and areas packed with lily-pads. This year, the weather was absolutely clear and no fog lifted from the water, Narnia-like, but it was no less creepy. Save for the human-like conversations of bullfrogs, no other sounds emanated from this small expanse of still water, my heavy breathing notwithstanding. 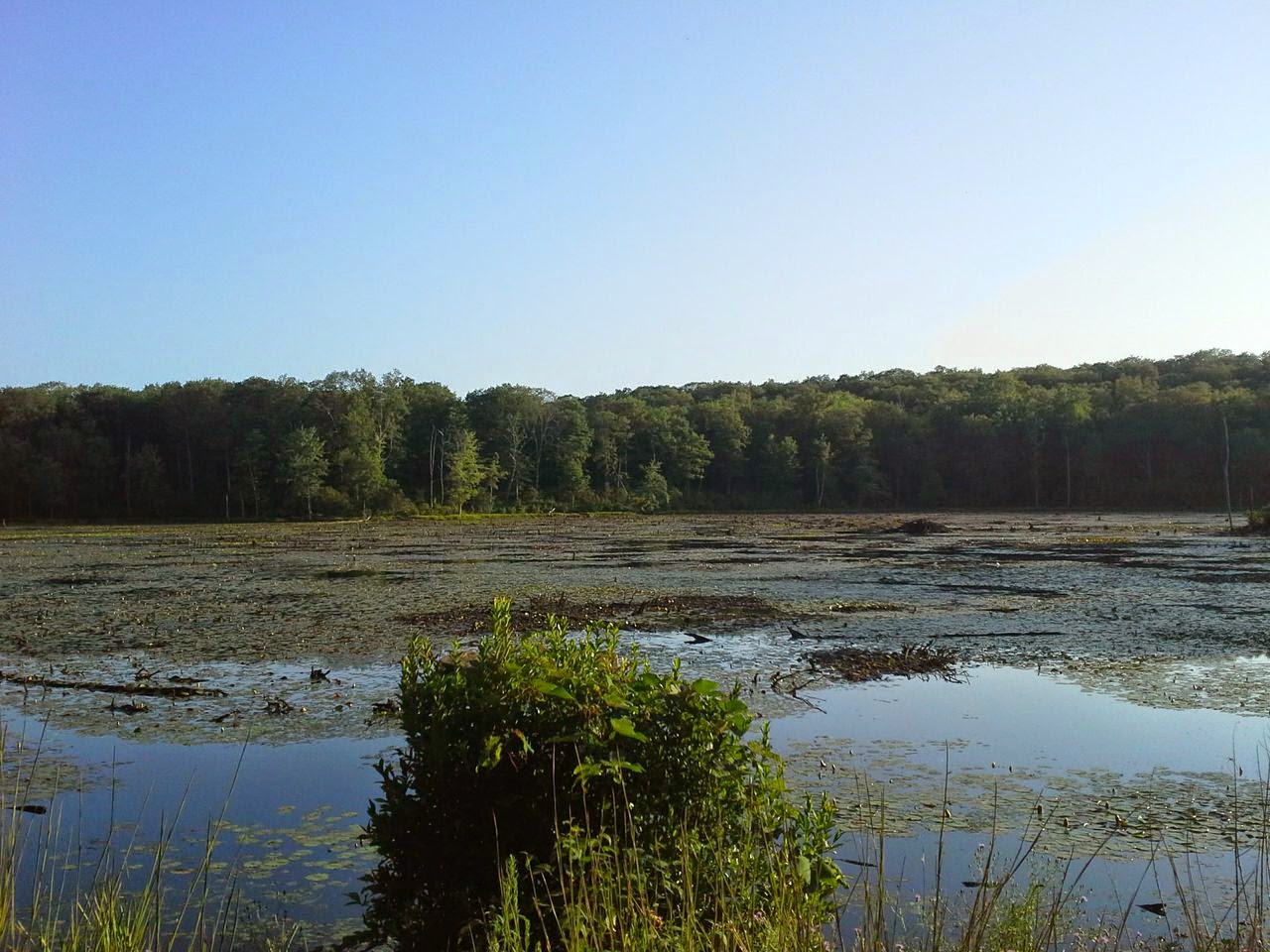 So now I need Parkour lessons? 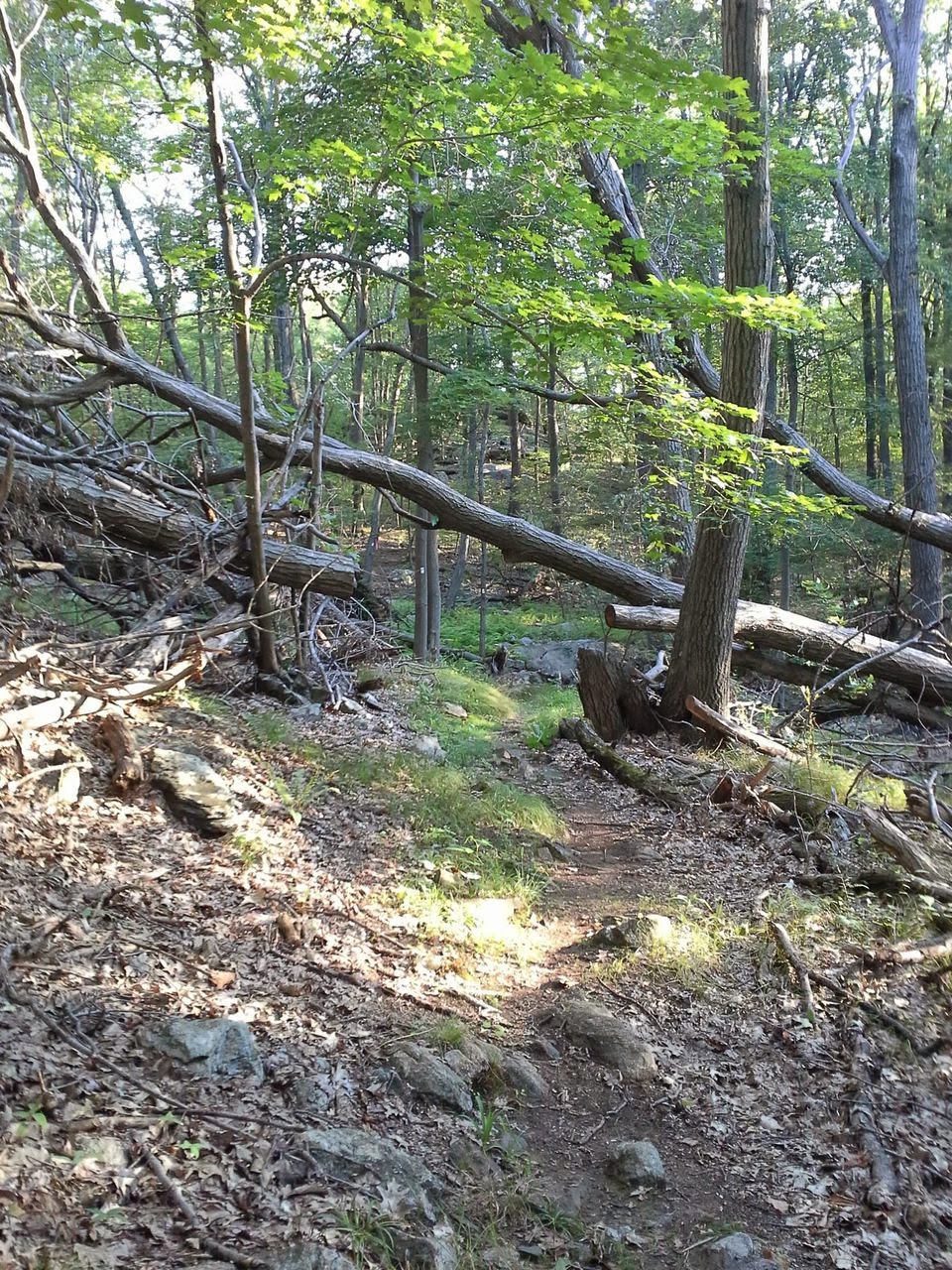 In October of 2012, Super-storm Sandy wreaked havoc in most of New Jersey, downing trees and power lines, flooding homes along the shore, forcing people out of work and school. The Wildcat Ridge WMA was not immune to the effects of the storm and so suffered a plethora of downed trees, many coming to rest in the middle of major trails. During the summer of 2013, the Rompers would have to climb over several downed trees, much to my dismay. I remember thinking aloud, well, very loudly, "Does Rick think I'm gonna climb over these trees? DAMMIT RICK!" And so I climbed, balancing precariously on large and small limbs, jumping down, feeling like a badass until we had to do it again, several times. This year, the trails had been cleared, much to my personal delight! 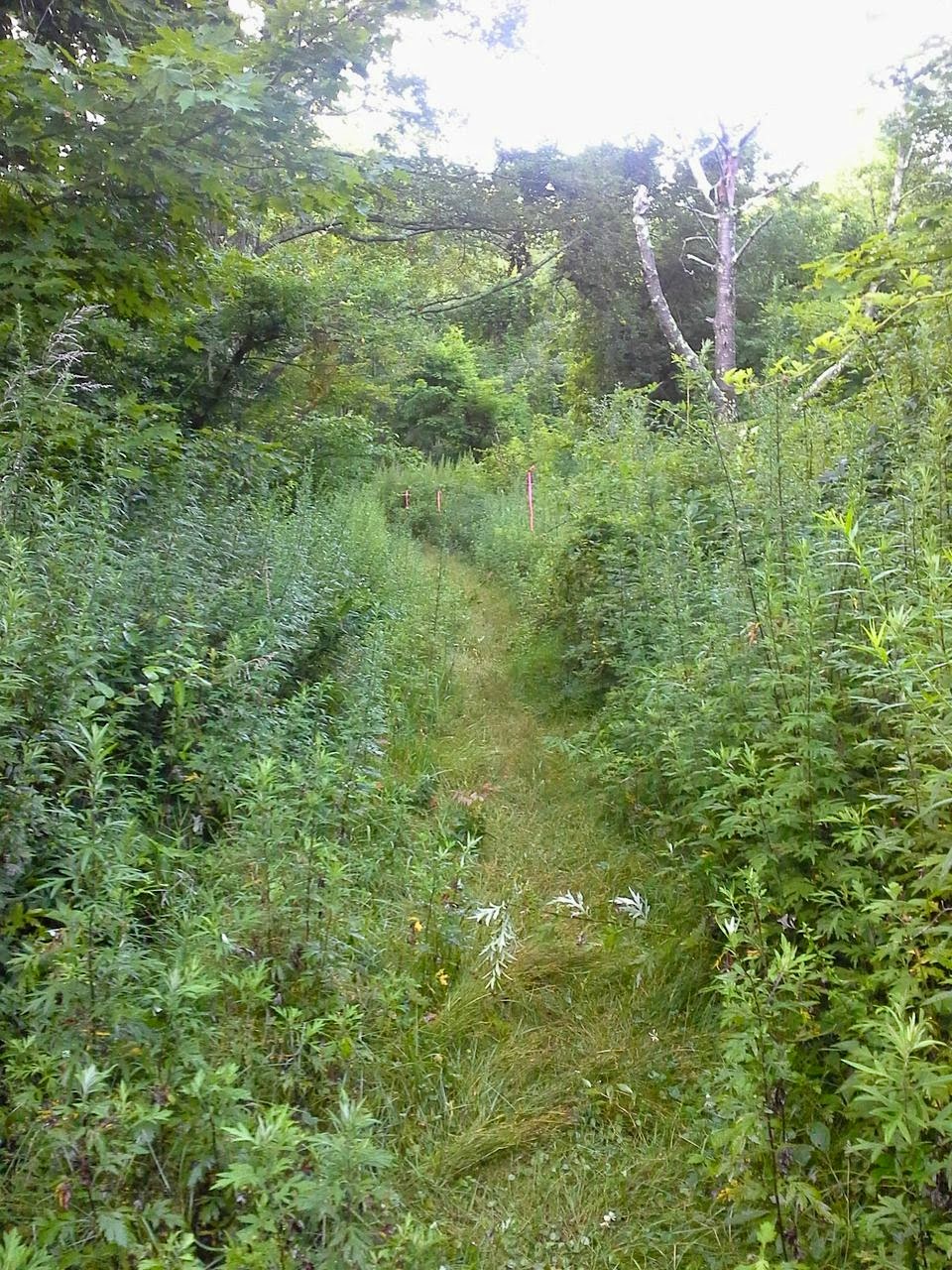 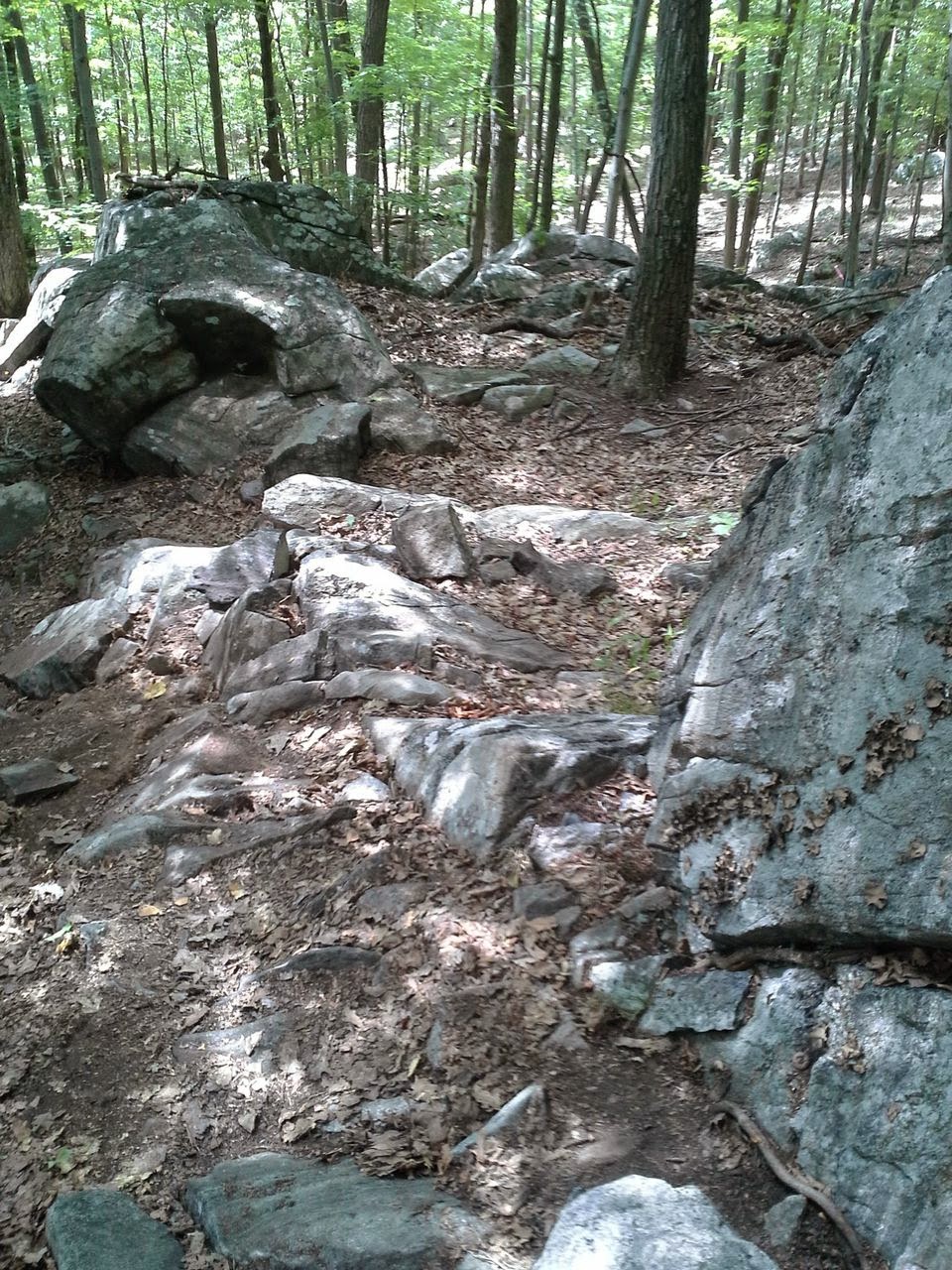 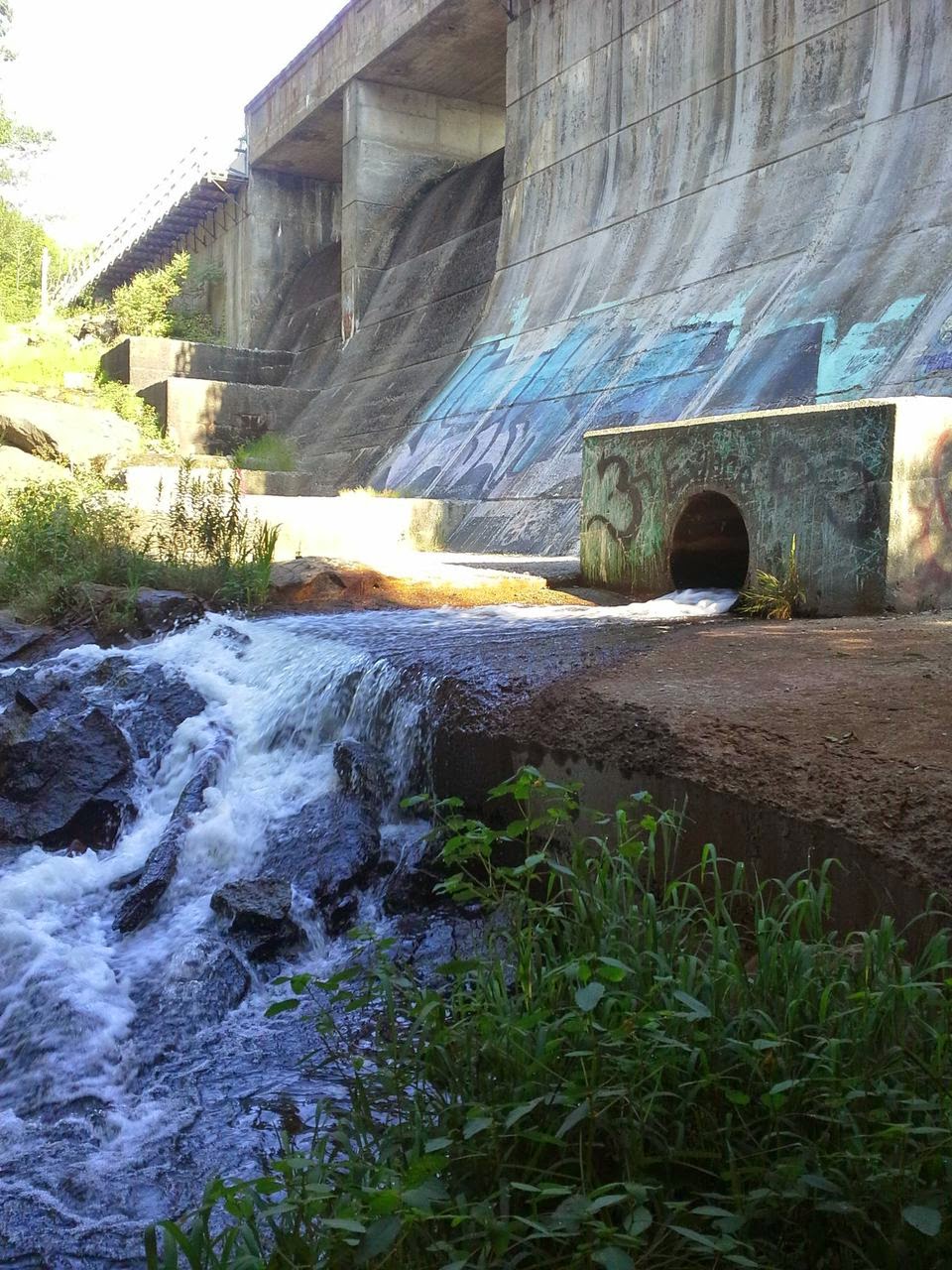 After several steep ascents and subsequent descents in a boulder field there is Beaver Brook that you have to cross in order to continue on the course that will eventually skirt by the edge of Splitrock Reservoir. I pranceth not, but others do. Many runners skipped, hopped and jumped Parkour-like over the boulders and slippery rocks. I, on the other hand, calculated every single step with the precision of an engineer for fear of falling face first in the water. After crossing, the course hangs a left and travels in a fairly straight path the to dam, from which a large pipe gently releases water from the reservoir. In years past, Rompers scaled the rocky side of the damn onto Split Rock Road. This year, however, we had to climb over the the area where the water flowed from the pipe. Jumping over but not completely clearing the warm, slightly fishy smelling rivulet and then climbing on painful gravel and concrete blocks, bypassing the road that was under repair.

It's all downhill from here, kind of.
After you scale the dam, you ascend and then descend onto power-cut land, electrical energy frenetically buzzing above and around you. The trail is rolling for a mile or so, and then it joins what used to be a the Oreland Branch Railroad at a slight and very pleasing grade for the next two miles or so. At the end of this section, you travel onto a residential road (downhill!) with big houses and loud dogs before re-entering the forest to rejoining the trail lollipop style to complete the 10 mile loop. 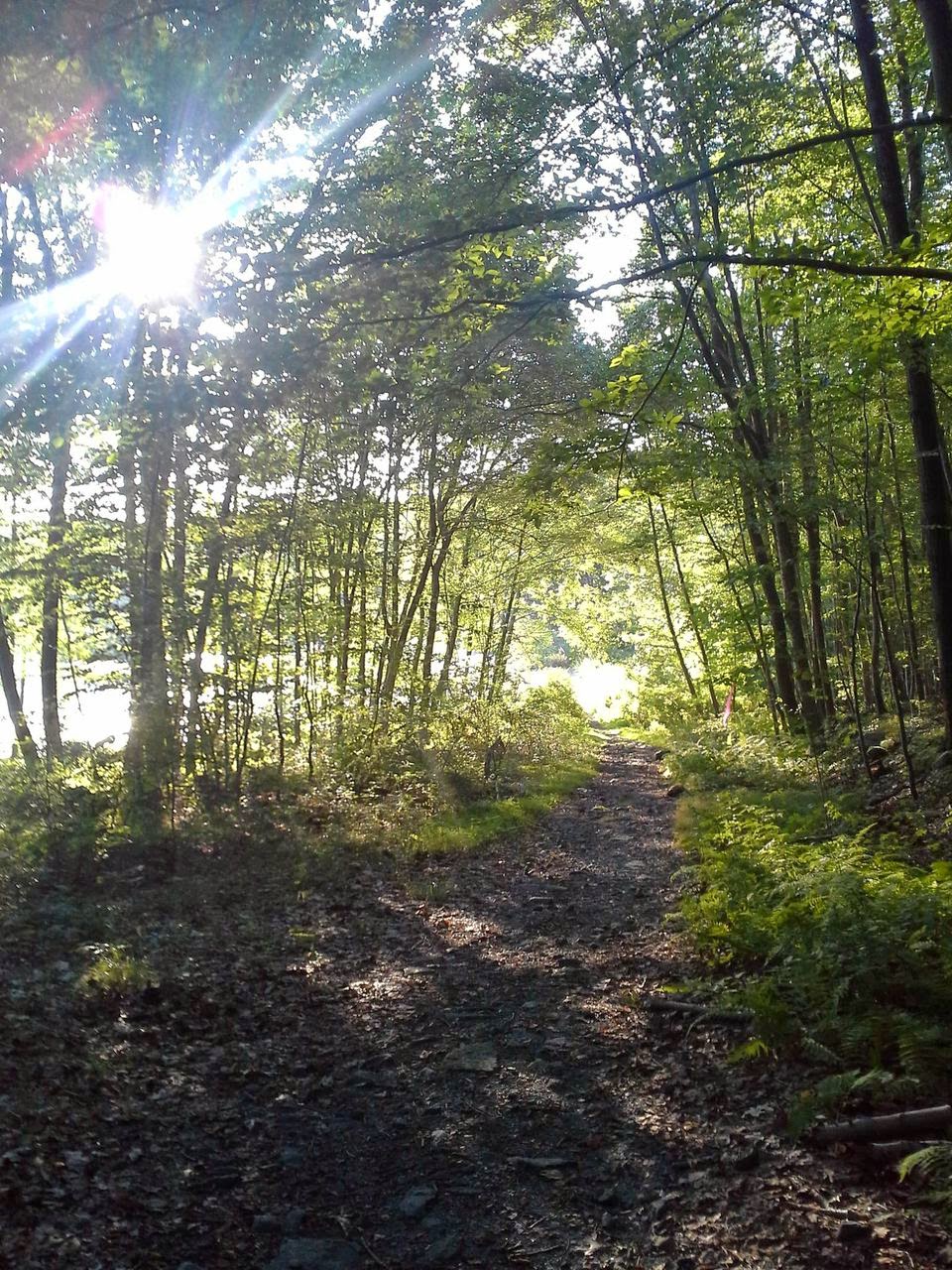 This is not a trail race in which you can zone out, running neatly trimmed single-track trails with few surprises or challenges. This course challenges everything possible--your senses and sensibilities, fears, training. There is a sort of primal quality to it that, while it isn't for everyone--especially those new to trail-running, inspires you to appreciate those trails that are not fantastically weird or scary. You must extend your hands, feet, and heart in friendship to the forest, and it in turn, will befriend you.